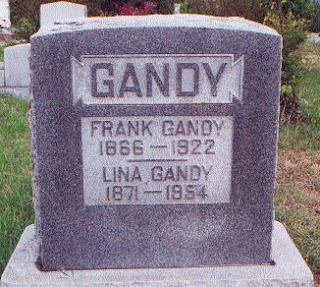 Posted for my cousin, Corey T.    Salina Isabel Burdette Gandy is his great-great-grandmother.
Memorial Sketch of Mrs. Frank Gandy
Transcribed from, The History of Hennington and Related Families
Compiled by Roy B., Lily May and Ollie Ray Hennington
Presumed to be from the Meridian, Texas newspaper, April 1954 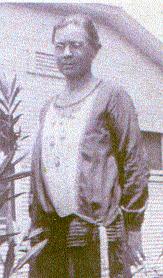 (Lina Gandy 1930)
Mrs. Frank Gandy, a pioneer citizen of Meridian, died at the home of her daughter, Mrs. R.W. Taubert, San Antonio, Texas on Thursday morning, April 15, 1954, at the age of 82 years, 8 months, and 2 days.
Impressive funeral services were held in the First Methodist Church, Meridian, Friday, April 16, 1954 at 2:30 o'clock p.m., conducted by Rev. B.L. McCord of Ft. Worth, assisted by Rev. J. Lester Davenport and Rev. Gordon Bays, followed by burial in Meridian Cemetery.
Miss Lina Burdette was born in Leon County, Texas, on August 13, 1871. With her parents, B.A. and Millie Burdette, she came to Meridian at the age of ten years. Here she spent the remainder of her childhood and most of her mature life.
As a child she was converted and became a member of the Baptist Church. Her parent's home was a Christian home; there she received the fundamentals of the Christian faith and of the good life. 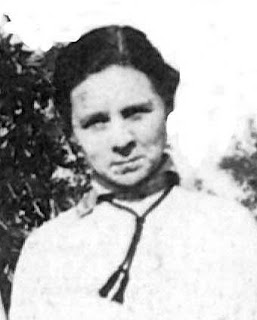 The young Miss Lina Isabel became the bride of Mr. Frank Gandy in November of 1885. They were the parents of twelve fine children, and theirs was a happy home where parents and children knew and practiced the Christian virtues and skills. They knew and loved the Bible. In order that the family might be reared in a religiously united home, Mrs. Gandy united with the Methodist Church and continued in that communion, happily and faithfully as long as she lived. From the Gandy home in the persons of sons and daughters and grandchildren have come an amazing variety and quality of leadership in Methodist churches of this state and in other churches as well.
The husband and father, Mr. Frank Gandy, passed from this life in 1922. Besides her husband, Mrs. Gandy mourned the loss of two sons and four daughters. The sons were Jesse Terrell and Herbert L Gandy. The daughters were Olive Estelle and Erva June and Mrs. Lola Landtroop and Mrs. Ella Brown.
Surviving members of the family are two sons, C.M. and R.L. Gandy of Meridian and four daughters, Mrs. H.C. Hanna of Morgan, and Mesdames I.W. Ray, R.W. Taubert and Hayden Miller of San Antonio; also two sisters, Mrs. J.P. Jordan, Bentonville, Ark., and Mrs. Ella Hennington, Anton, Texas, one brother A.A. Burdette of Sudan, Texas, fourteen grandchildren, twenty-five great grandchildren, and three great-great grandchildren.
Out of town relatives attending the funeral were Laudies and Rex Jordan, Plainview; Mr and Mrs  Ben Burdette and Henry Burdette, Gorman; Mr and Mrs J.E. Rogers, Okla City; Mr and Mrs Howard Snider, Ft Worth; Mrs Iva Joe Patton, Shreveport, La.; Mrs Joe Perry and Morris Landtroop, Amarillo; Mr and Mrs Jas. Landtroop and son, Plainview; Mr and Mrs Elgin Gandy and  children, Ft. Worth; Mr and Mrs Alton Gandy and children, Valley Mills; Mr and Mrs I.W. Ray, Mr and Mrs Hayden Miller and son, Kenneth, and Mrs R.W. Taubert, San Antonio; Mr and Mrs Hery Loader, Iredell, and Mr and Mrs H.C. Harris, Morgan.
My personal notes:
At the time of her death, husband Frank had passed in 1922. Two sons Jesse Terrell and Herbert Leslie and daughters Olive Estelle, Erva June, Mrs Nola Landtroop and Mrs Ella Brown had deceased.
Surviving members of her family were:
C.M. (Charlie Maurice) Gandy of Meridian, TX
R.L. (Robert "Lum") Gandy of Meridian, TX
Mrs. H.C. Hanna (Ethel Ann) of Morgan, TX
Mrs. C.W. Ray (Emma Ida) of San Antonio, TX
Mrs. R.W. (Gladys Alberta) Taubert of San Antonio, TX
Mrs. Hayden (Josephine) Miller of San Antonio, TX
Two sisters surviving: Mrs. J.P. (Susan Elizabeth (Betty) Jordan, Bentonville, AR
Mrs. F.W. (Ella Mae Burdett) Hennington of Anton, TX
one brother: A.A. (Albert Alonzo) Burdett of Sudan, TX
Nov. 25, 2001
Request for copy of Marriage License with F.C. (Frank) Gandy for Nov. 5, 1885 in Somervell County, Texas. No records of such located for a license.
Posted by Gayle at 5:20 PM

What is Prussia? Understanding Prussian History 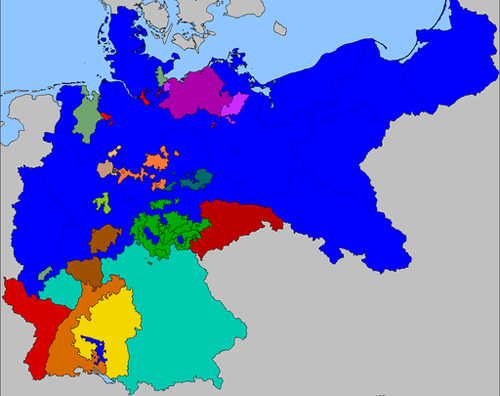 So your ancestors are listed in records as “Prussian,” but you can’t find Prussia on modern maps of Europe. What gives? Before being absorbed into Germany, “Prussia” (German: Preussen) was a major military and economic power in Central Europe during the 18th and 19th centuries. Let’s take a look at Prussian history to see what we can learn about your Prussian ancestors.
First of all: Where was Prussia? At its peak, Prussia included half of modern Poland and all but southern Germany. Though itself one of Germany’s many states, Prussia at one point included: West Prussia, East Prussia, Brandenburg (including Berlin), Saxony, Pomerania, the Rhineland, Westphalia, non-Austrian Silesia, Lusatia, Schleswig-Holstein, Hanover, and Hesse-Nassau.
Additional guides at https://tinyurl.com/kpxkrkct
Posted by Gayle at 11:30 AM 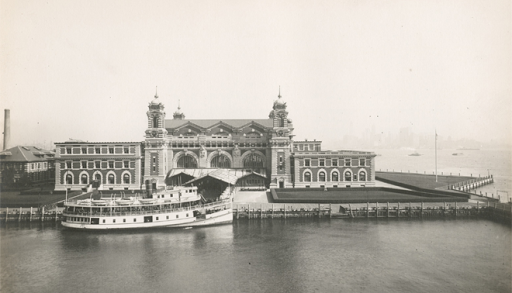 As director of the American Family Immigration History Center at Ellis Island, Jackie Schalk often works with visitors who are sure their ancestors arrived at Ellis Island in the mid-1800s.
The Ellis Island website offers full coverage of New York’s era as a major port of immigration from 1820 to 1957. “These records are going to open up opportunities for so many people who visit. I can’t wait,” Schalk says.
The joint project also has placed an index to the records on the free FamilySearch website. The index links to record images on the Ellis Island site. On either website, you’ll need a free registration to view matches to your search results.
To learn more on researching Ellis Island records, go to https://tinyurl.com/4by48yrw
Posted by Gayle at 11:25 AM

A special thanks to Maria Jones for keeping me up to date on this terrific article, and plenty of genealogy links.
Don't pass these sites by...
When you decide to build your family tree and trace your heritage, you’ll likely start with the people in your immediate family. Any grandparents or older relatives you have are a great source of information. Not only can they give you the names of their parents and others who passed away, but they may remember birth dates and death or marriage dates too. All of the information that they give you can help you weed out similar names you come across during your search and create an accurate family tree that you will want to share with your kids and future generations.
Learn more from these informative and helpful sites at:
https://www.ireviews.com/best-genealogy-sites/
Posted by Gayle at 6:38 PM 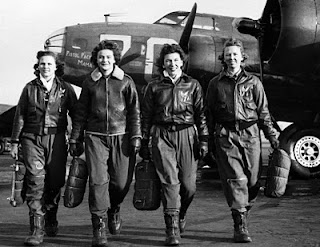 Women served on both sides of World War II, in official military roles that came closer to combat than ever before. The Soviet Union, in particular, mobilized its women: Upward of 800,000 would enlist in the Red Army during the war, with more than half of these serving in front-line units. British forces included many women alongside men in vital anti-aircraft units. And Nazi Germany followed suit later in the conflict when its flagging fortunes required the nation’s full mobilization.
Additional text on women as bombers, TheAck Ack Girls, and much more at:
https://tinyurl.com/wv6pszd
Posted by Gayle at 6:08 PM 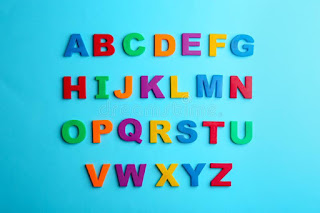 Every serious researcher knows the importance of understanding the genealogy "lingo." Like other areas of study, family history has its own vocabulary that you’ll encounter in your research. Our editorial staff has put together this list of key genealogy terms to give you a hand.
Go to https://tinyurl.com/ycpq4zye for alphabetical listings
Posted by Gayle at 9:55 AM 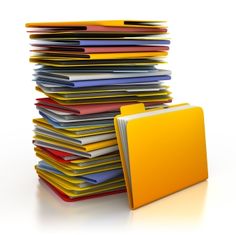 Identify some organizational goals then set aside an afternoon and compile all of your genealogy materials. Whether you have one small box or 10 big boxes, no matter. Just pull it all into your working space.
Next, you’re going to assess what you own. This isn’t a detailed assessment, but rather a chance (and for some this may be your first time) to see all of your genealogy papers in one place. Don’t worry about logging everything at this time either. For now, just get a sense of what you own.
Looking for more tips and a free e-book? Go to: https://tinyurl.com/yc2vd262
Posted by Gayle at 9:45 AM